And what should greet us on the typical late October day when the dead are said to walk the earth?

Why snow, of course.

From about noon until 6 it snowed fat, white flakes. No ghost, goblins, or ghouls were spared. 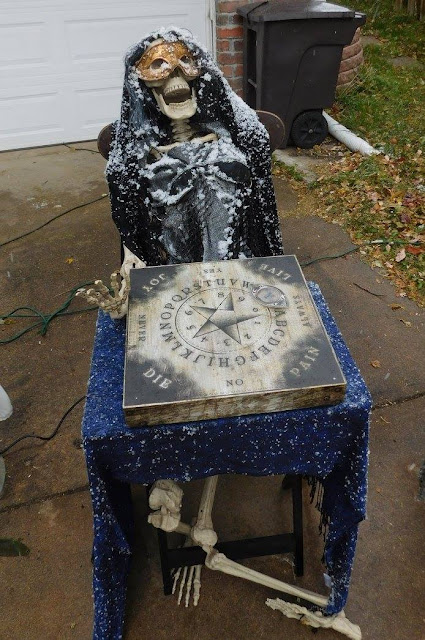 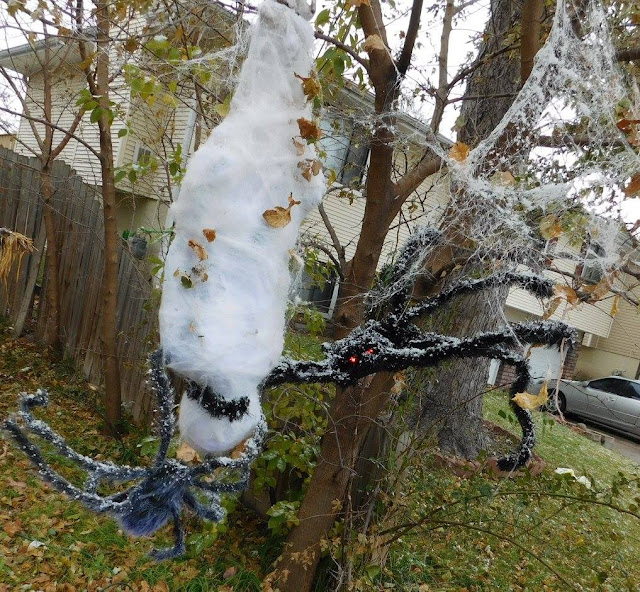 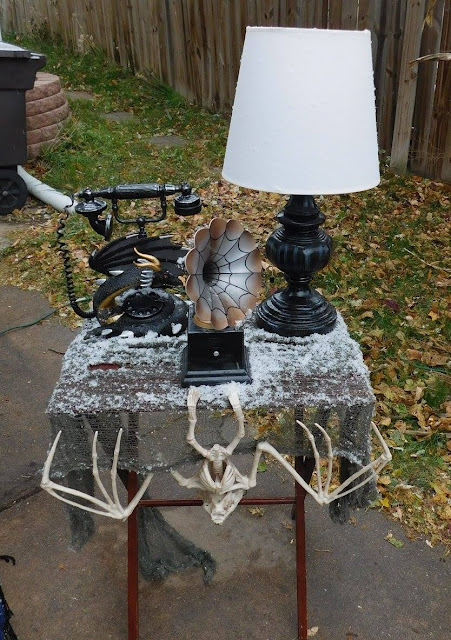 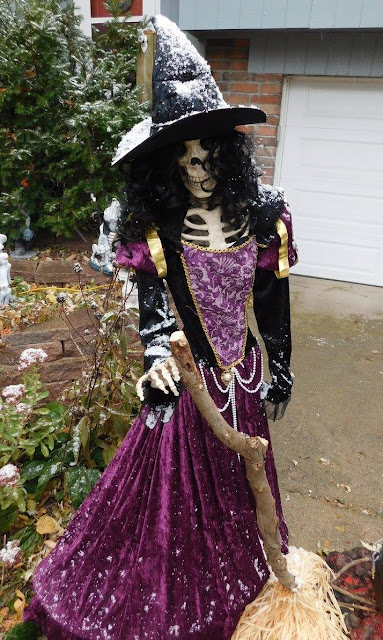 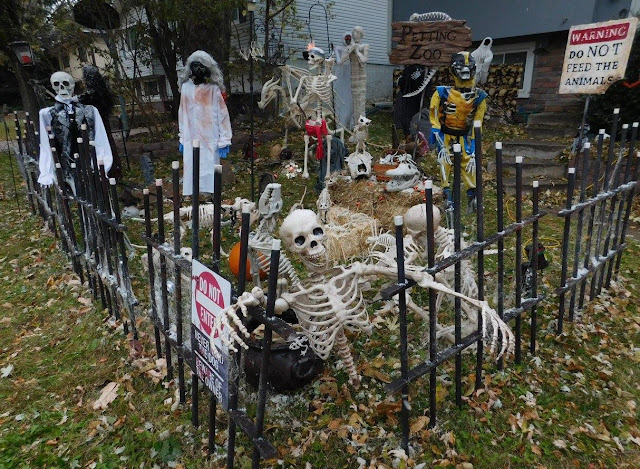 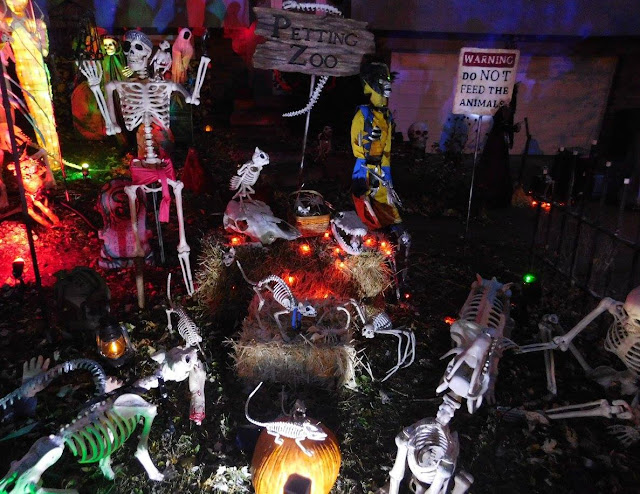 The newest addition was my dragon. 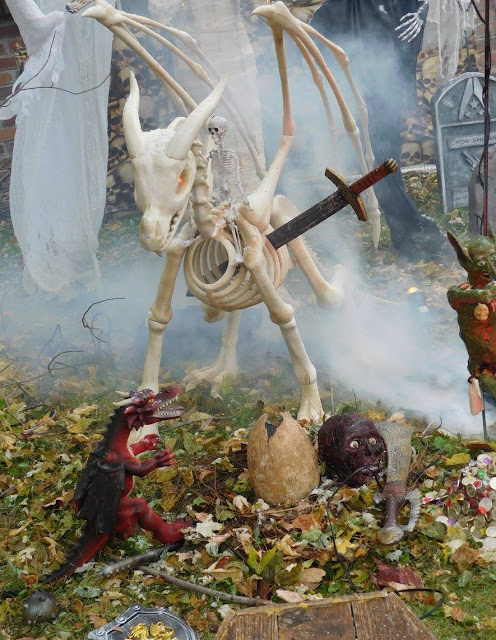 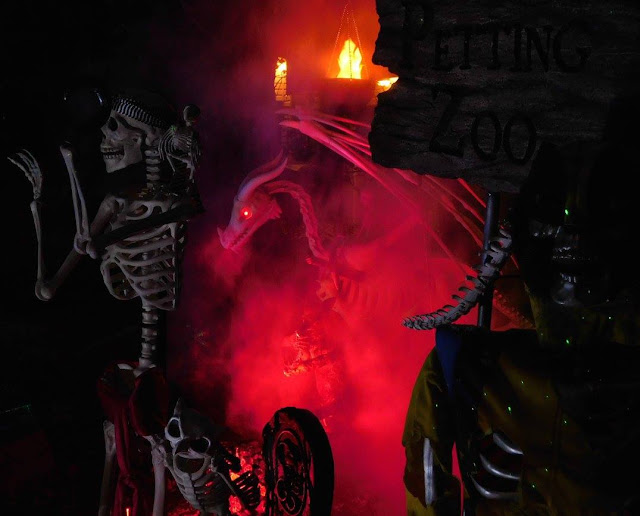 And a little triceratops skeleton for the zoo. 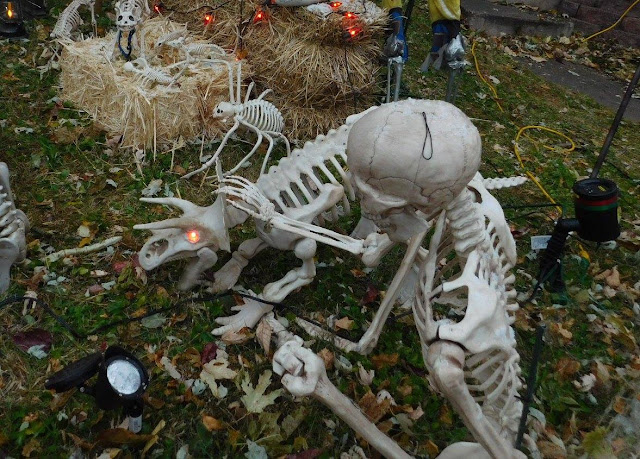 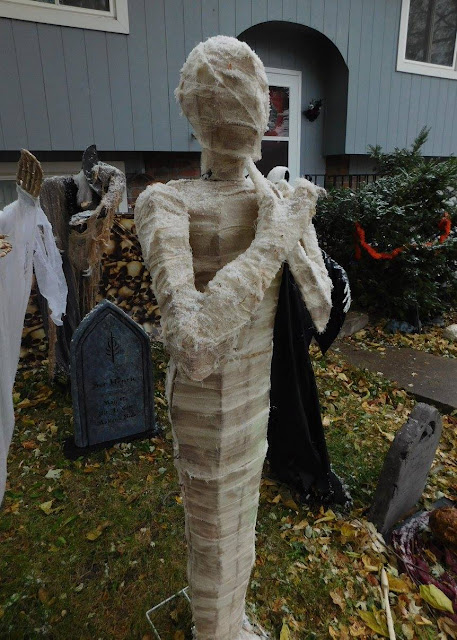 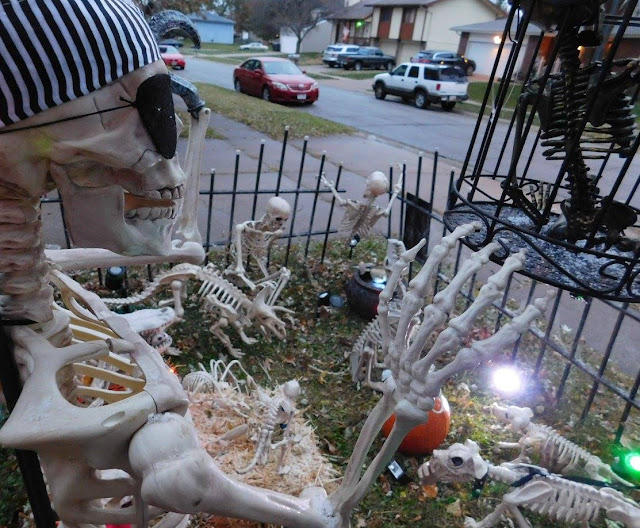 Check out the video to see all the display at work:

September is the stepping stone to October and we all know what that means, time to get ready for All Hallows Read. What better way than with a free poster or four?

This is my seventh year making free posters for anyone to share and use to advertise All Hallows Read. Free!

I'm trying something a bit different by hosting the files at dropbox. They're also at deviantart, if that's easier to download off of.

I don't put a year on any of the posters, so you can reuse any of the old ones you'd like such as:

You can download the whole lot for this year from a file here right now if you'd like. I also included all of the past years in the dropbox file so you can add whatever you want whenever you'd like. Time is meaningless!

Now let's get to the new ones!

Torn - Things are getting stranger around here when an eerie message appears on the tattered wallpaper of an abandoned house. 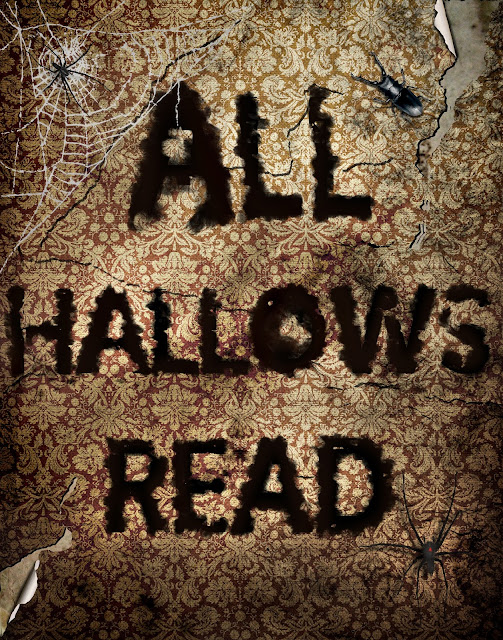 Slime - Who doesn't love to dig handfuls of gooey slime out of the mysterious meteorite strike? Warning: May discover secretly unknown super powers or grow extra limbs. Alien larva discovered squatting inside of your thoracic cavity are not affiliated with Slime-n-Goo industries. If ingested please consult a mortician. 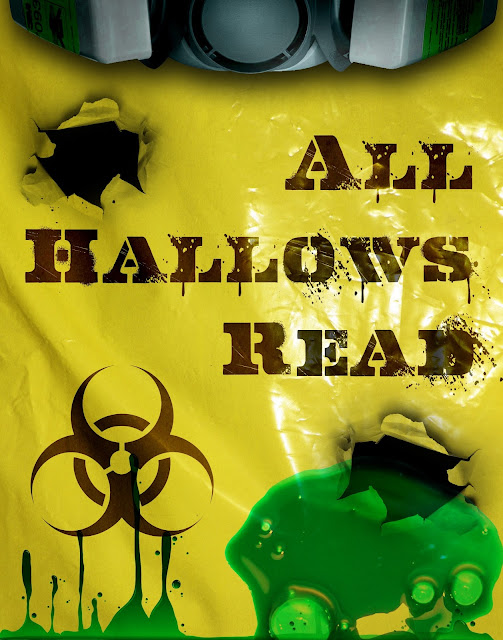 Firefairies - The firefairies are hard at work in anticipation of the coming solstice. But don't get too close, these fairies sting with a powerful bite that won't stop until your skeleton is burned free of its flesh sack. 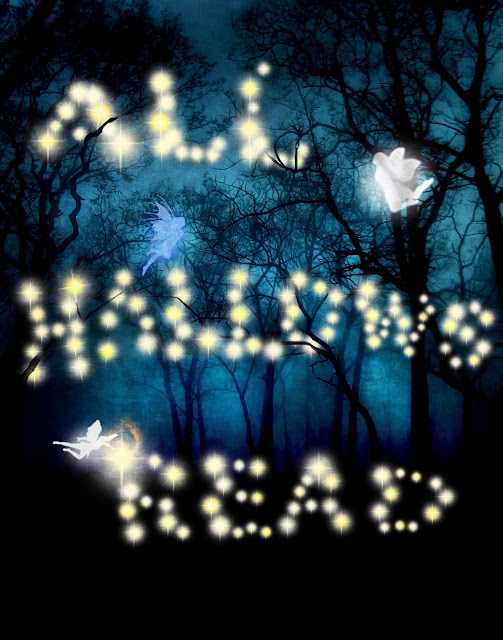 Typewriter - Click clack go the keys. Click clack rattle the bones. The writer doesn't hear the echo until it's too late. Typewriter Gif - If you want to do some digital promotion, I also made a motion poster (gif) of the typewriter.

Once again, they're all free, all of 'em. So download the links, print, and decorate to your heart's content.

Back in June I wrote a short story to enter into Wattpad's contest tied in with Hulu and The Handmaids Tale. It was to be something inspired and set in that world but not using any of the characters or plot. Oh, and only 500 words.

I'm sharing because I found out that my story The Flood got chosen as one of the Top 25. 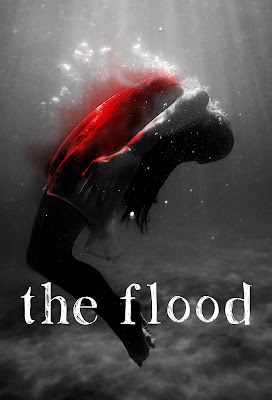 They'll eventually pick 10 out of those to be the real winners (or already have, it's hard to tell), but it's just nice to be nominated.
at 12:18 PM No comments: Links to this post

For the past year I've lost my mind and taken to writing a ton of Dragon Age fanfic.

I collected all four books about my Cullen and the Hero of Ferelden into one giant one, which you can download for free at Smashwords. 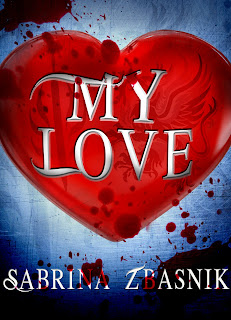 The entire series of my Cullen and Lana Amell stories as they travel from Kirkwall to Skyhold and beyond. A what if story if the mage Warden required Cullen's assistance while he was in Kirkwall. After connecting in the deep roads, they begin to rekindle their momentary romance in Skyhold. But with Adamant looming, it's not meant to be.

Romance, humor, pain, loss, and a few happy tears during this colossal epic that crosses all of thedas. From Ferelden to Tevinter and beyond, the story includes many familiar Dragon Age faces from Alistair to Zevran and everyone in the middle.

Contains My Warden, My Templar, My Hope, and My Future in chronological order.

Read the entire epic in one book with a few special pictures.


Or there's the latest one I just finished up about Alistair falling in love with his bodyguard. 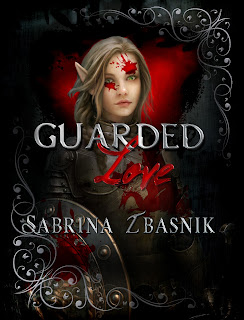 Alistair's life isn't all bad. He's King, he's got two kids he adores, a wife he's vaguely aware exists, and pants that fit. The only thing missing in that blissful domestic picture is someone to love. But all in all, things were weirdly working out for him.

That all changes when assassins dare to come after him and his children on the little prince's naming day. With a threat brash enough to attack the King in broad daylight, he takes on a personal bodyguard. Picked seemingly at random from the City Watch, Reiss thought she was little more than an average elf trying to make it in thedas. Now it's all on her to keep the King alive against this enigmatic threat and try to ignore the fact she keeps blushing whenever he smiles.

A follow up to my Cullen/Amell saga My Love.
at 5:52 PM No comments: Links to this post

It's that time when I pull out my pitiful cake decorating skills all in honor of my husband's birth. I give you his banana birthday cake for 2017. 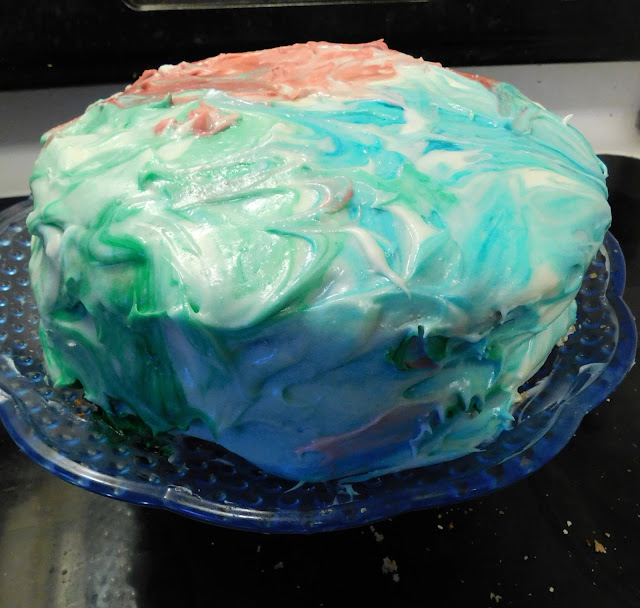 I decided to not want to try too hard, so I added drops of food dye to the frosting and then proceeded to mash it all around to create a lazy tie-die look.

To the frosting and cake itself I added some rum flavor to make it taste a bit more like banana's foster. But we're mostly here to marinate in my terrible decorating skills over the years. Let 'er rip!