August is almost gone and you all know what that means...

Spirit actually opened sometime during the last weekend. They haven't gotten much of the new merchandise set up but it didn't matter. I knew exactly what I wanted to get this year. A ghost writing book. I put on top of my witch's cabinet.

Despite being made of cardboard and plastic it looks pretty realistic even close up. And the writing in the book is actual sentences and not lorem ipsum covered in blood. 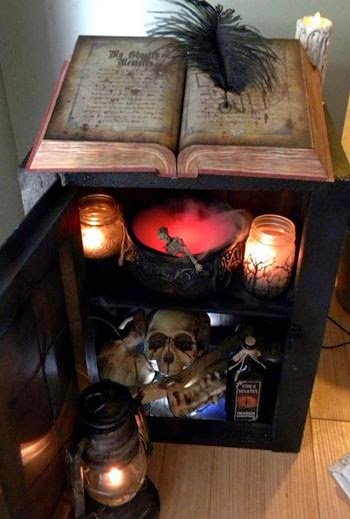 It's sound activated, which is extra annoying, but it's fun to watch it in action.

And because I secretly want to be a skeleton outside my skeleton, I got some new socks to go with my skeleton fingerless gloves. 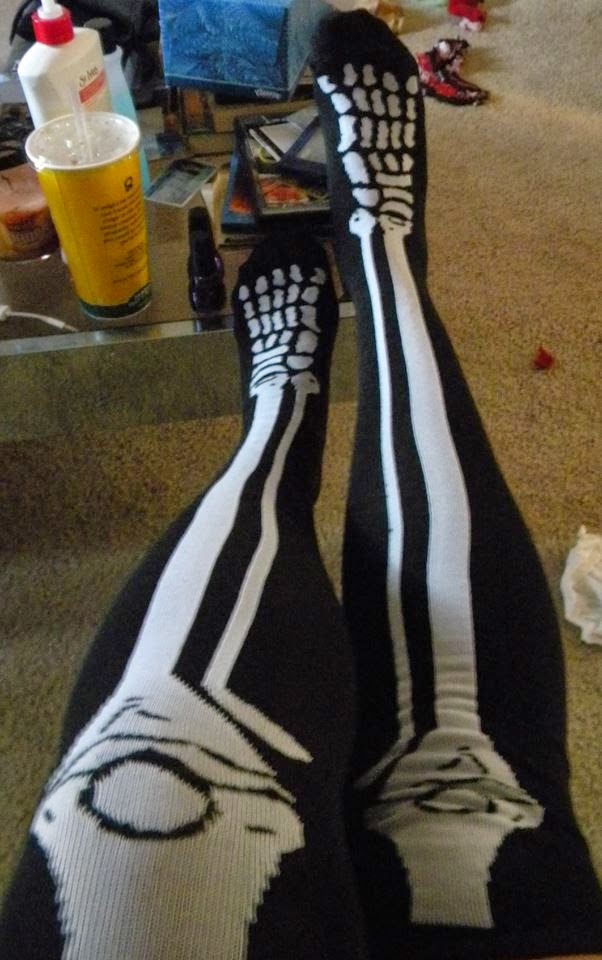 Halloween is coming...you've been warned.
at 9:26 AM No comments: Links to this post

As we crawl slowly to labor day, most of my halloween projects are stalled. I've finished what I could, and have to wait on stores to put out their goodies before I can complete the rest.

I did manage to top off one project that'd been on the sidelines since July.

We snagged a cabinet from goodwill that someone made out of leftover wood paneling and plywood. Not really fancy, but it had a certain je ne sais creepy. But it needed a shelf. So I finally got some pegs, a level, and sawed off a chunk of wood. 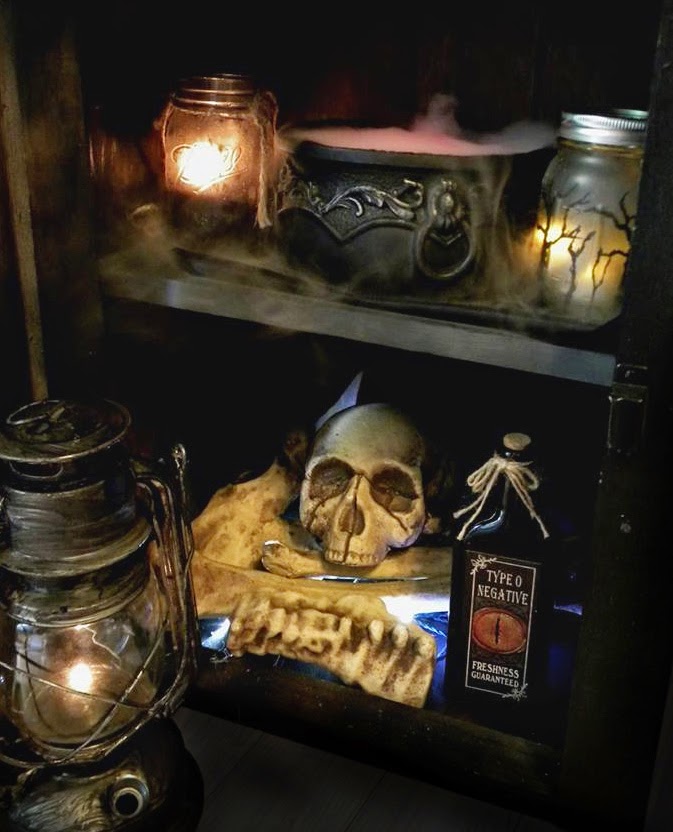 Needs a few more bones. I might get a different lantern or stuff in some candles. God knows I have a ton of candles.

They won't be ready until September, but I've also started work on the All Hallows Read posters. 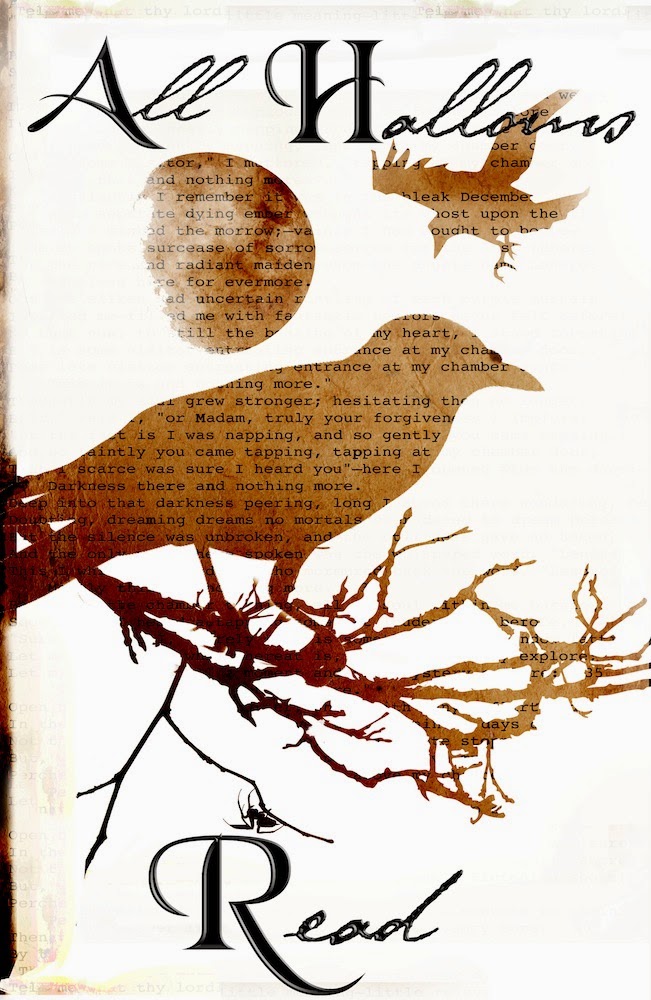 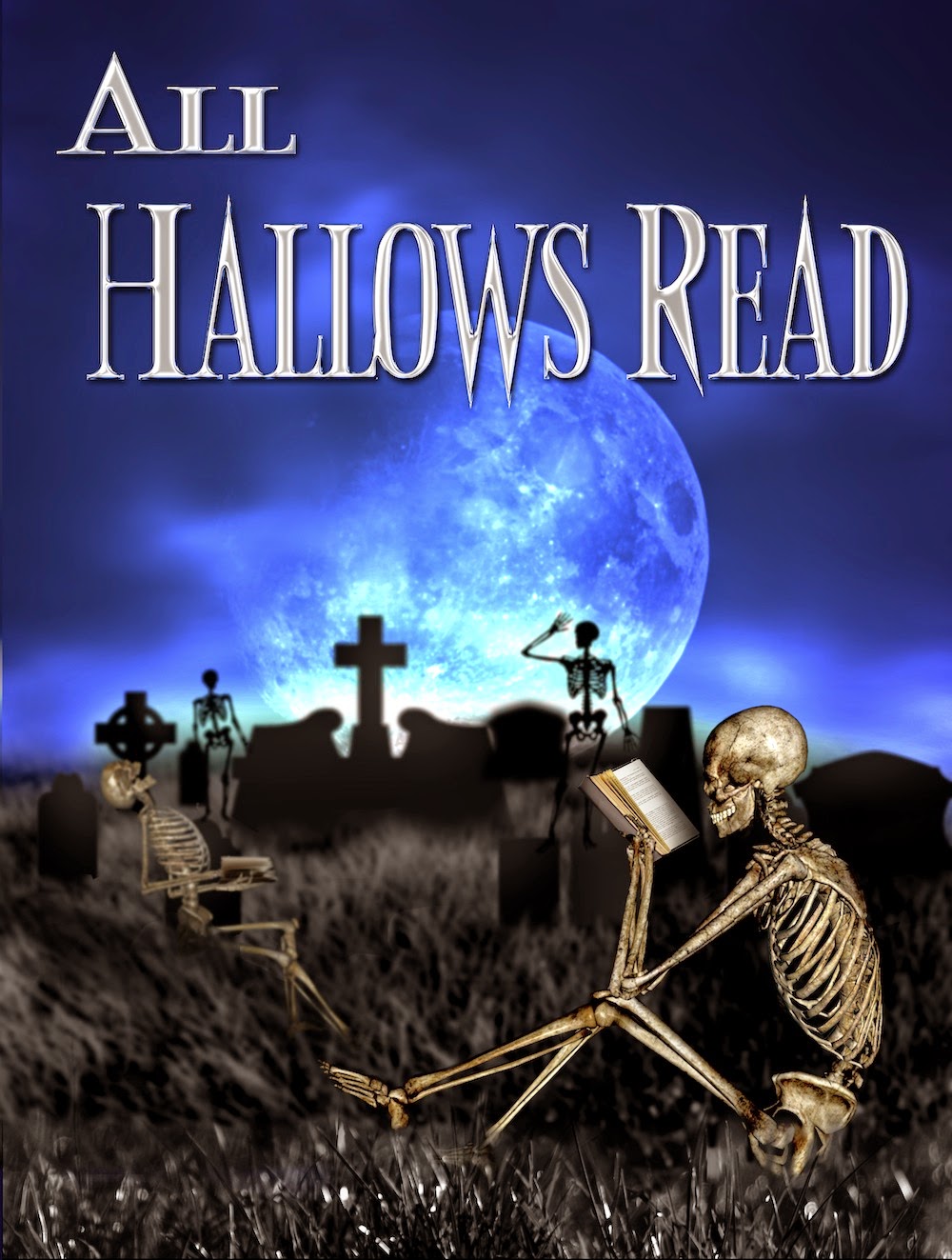 The full sized downloadable images will come out after labor day, like all things Halloween. Sigh.
at 1:32 PM No comments: Links to this post

In all the painting pilfering, I forgot to share a bit of good news.

One of my short stories pertaining to the art of prophecy and fates that really enjoy screwing around with Kings was accepted by Quantum Fairy Tales.

You can read The Prophecy here if you'd like.
at 1:58 PM No comments: Links to this post

Today started much like any other day: a late summer headache, a hand coated in paint, and hunting through Halloween stores.

I'd actually been thinking about Dark Candle a bit after I pulled out some of my unused votives to fill my witch lanterns. As part of the cosmic balance, I got an e-mail from them today and thought, "Why not see if there's anything new. Ooh, an RPG themed pack."

Perusing the lists of scents I froze and did a double take when I saw the listing for their Dark Grove™ candle. 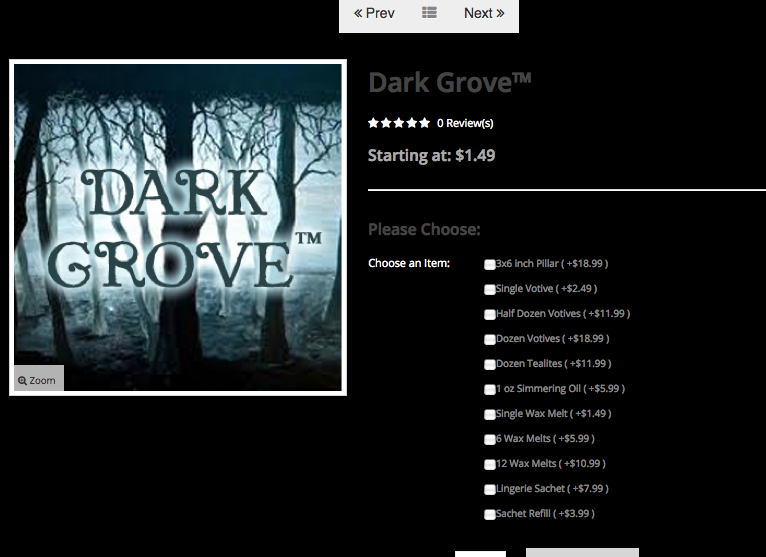 That forest behind their trademark is my painting. A painting that I've only sold once and it certainly wasn't as a commercial image. 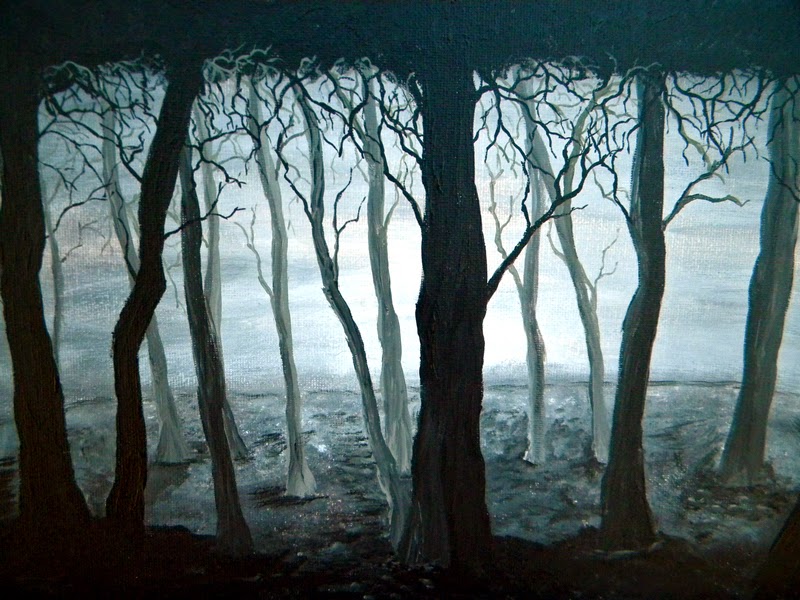 The candle is listed as being added in 2013. I painted my Dark Forest way back in 2010 and uploaded it to deviantArt.

Usually this would lead to rage, gnashing of teeth, etc etc, but I really like Dark Candle. I've even blogged about them before. Their Nosferatu is as much a part of my Halloween as Nightmare Before Christmas.

I sent off an e-mail showing evidence of my painting and got a response back. She claims that the person hired for candle art passed off my painting as her own work. If this is true, then Dark Candle should be just as pissed and possibly shame this thief "artist" themselves.

I'm sure some would say it's my own damn fault, that putting the painting out there means people can and should steal it whenever they want. I'm not asking for compensation, or even that she takes it down entirely. A credit link is enough for me. The painting itself is long since sold, I don't have any prints of it.

But it does suck to think someone gained something, if not money then prestige and possibly other work, for passing off my creations as their own.

I have tons of things people can download and use for whatever they want. My nerdy baby shirt templates, my nerdy valentines, my years of All Hallows Read posters. But please, if you want to use something of mine I haven't explicitly said is free for anyone to use, just ask. More than likely I'll say "sure, go ahead."
at 8:03 PM 2 comments: Links to this post

Cappuccino Lays - I Ate Them And Lived

Let it be known that when it comes to food, I am a masochist. 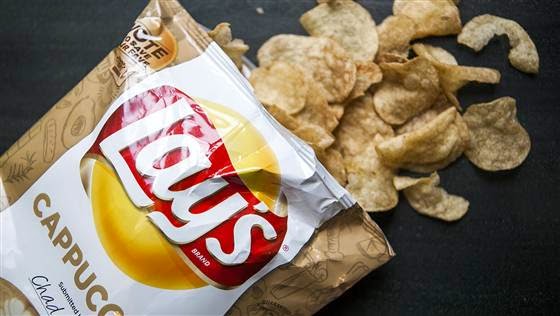 Cracking open the bag, all that wafts out is the artificial scent of a cheap coffee house. If one were to puncture a keurig cup, I imagine it'd smell like this. A coffee scent authentic enough you know what it is but there's something fraudulent in the edge.

First bite, there's a flood of the coffee scent into your nose and a dusting of sweet floats across the palate. But it's all banished with the overwhelming flood of potato. Potato and the salt punches down at the coffee til it tastes like a plain Lay's.

Second bite, more potato. The coffee taste is buried, yet the scent remains.

It's as if someone took powdered coffee creamer and dumped it over a bag of chips. There's not a flavor to speak of, but there is the concentrated smell. It's especially thick across the fingers, as you'll be smelling the powder hours after you threw the bag aside.

So, if you're dying of starvation in the desert and the choice is live scorpions or the cappuccino lays, I'd say go with the chips. At least they have no known toxins.
at 7:38 AM No comments: Links to this post

August is upon us. In between the burned tar of summer's last scorching rays and shouts of back to school sales rests a dark respite; as peaceful as the grave.

The first weekend in august is when Yankee Candle has a little halloween premiere party. Usually there's something gothic-like that catches our eye, but this year they seemed to have doubled down on the boney bunch and forgot everything else.

We mostly wandered around just soaking in the Halloween atmosphere, not really feeling anything new for sale, and got a jar cover that looked like a spider web. A few other Halloween delights dropped at Michaels as well including a false candle for carved pumpkins that let me burn the hell out of my fingers.

You remember my scarecrow? The one that caused a major hot glue burn on my leg? I wasn't happy with the dark face and figured it needed some light.

Starting with a drill, I cracked a small hole into the thick plastic. Then I tried everything in my arsenal to widen it to fit the light source. The hot wire took forever and stunk to low hell. The drill bit was in no mood to play, so I finally yanked out a small saw blade and got to slicing.

The real problem came when I shoved the light in the skull and I realized it wasn't kicking out enough lumens. Thinking I was oh so clever, I wadded up tin foil and carefully jammed it inside the hole and tried to hot glue it in.

After burning five - ten layers of flesh off my finger, I used the end of a metal kebob stick to guide the foil onto globs of un-aimed glue.

But, I suppose it was all worth it for this creepy guy: 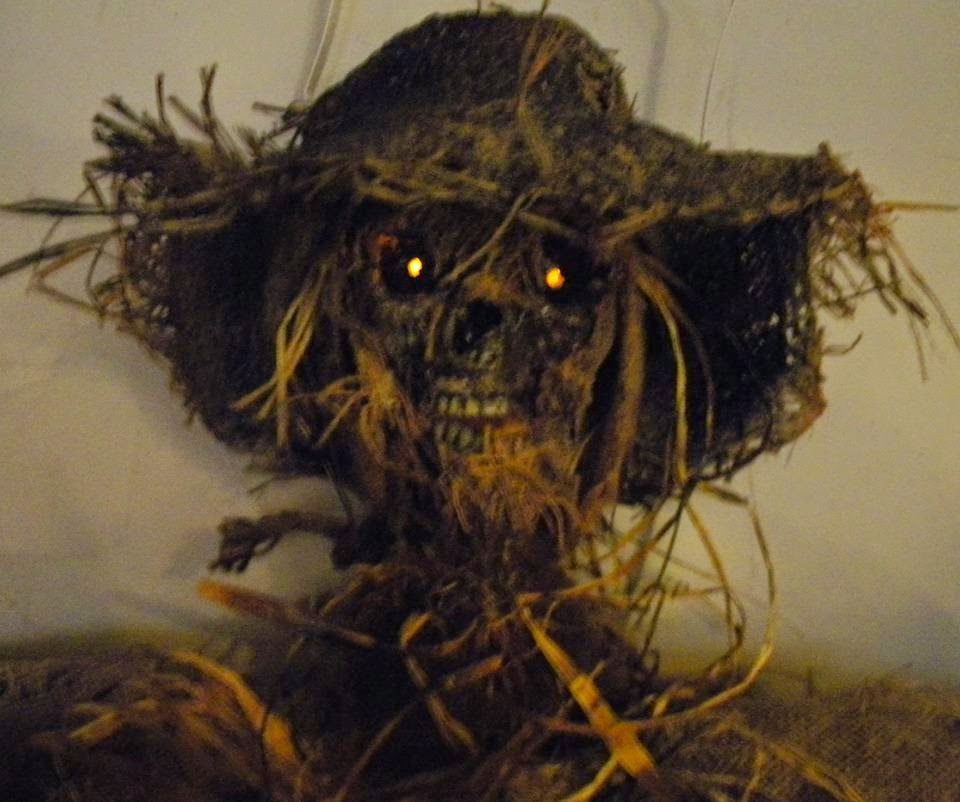 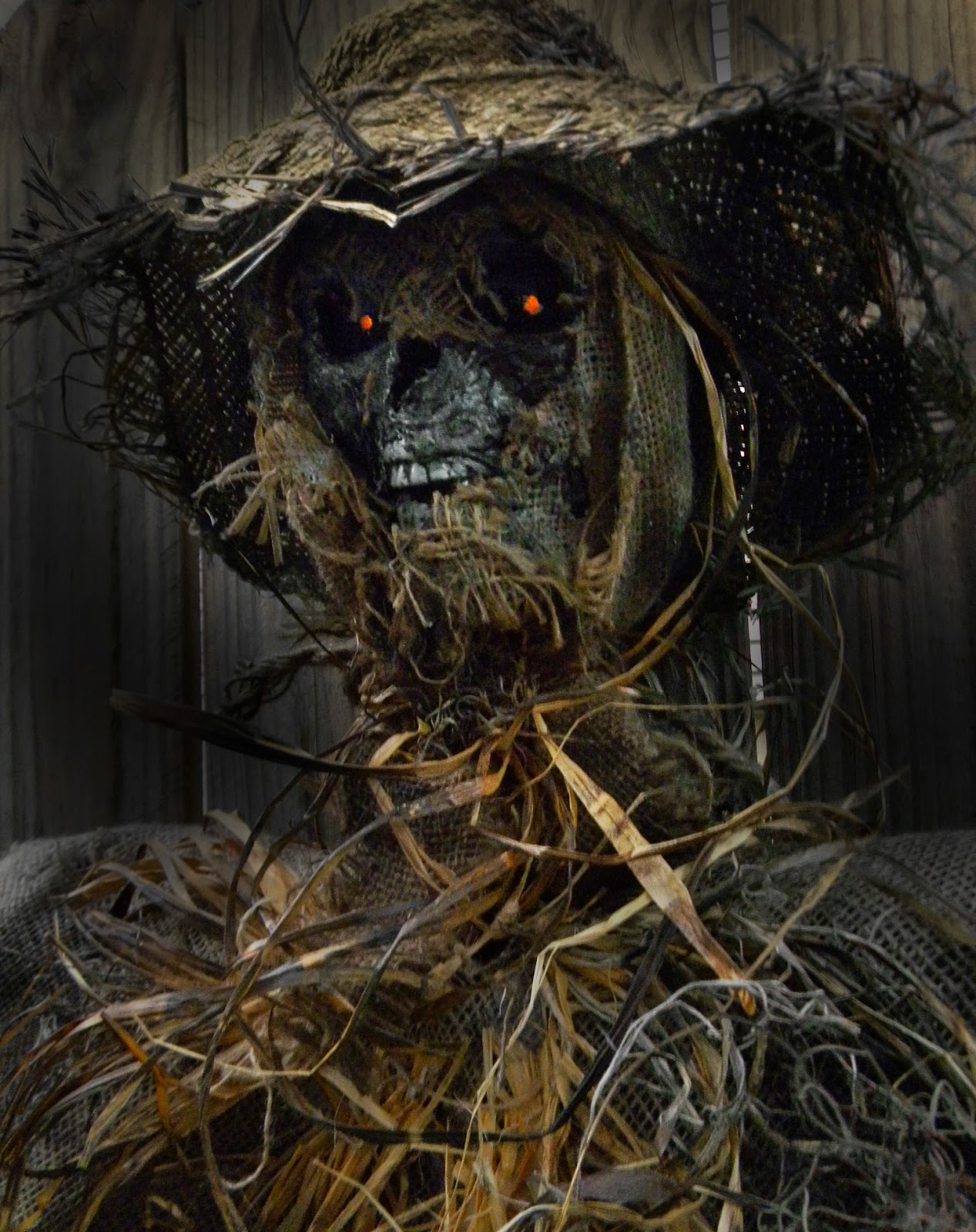 Or so we tell ourselves so we keep pulling out that cursed hot glue gun and letting it get to work on our tender flesh.

In less brain surgery, less power tools sides of crafts I finally made myself a witch's broom.

This was incredibly easy and cheap.

1. Find stick in pile of scattered tree remains.
2. Strip excess branches off and toss to dog who thought the whole thing was for her.
3. Roll raffia around the end, obscuring the stick below.
4. Tie off with jute string/whatever you have around.

The mannequin got some clothes on after a month of nakedness in the garage. 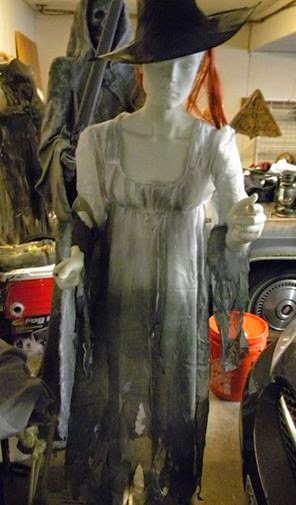 I have the skeleton arm and leg for her, but I still have to wait for the skull to crack into her face.

I want a plastic one, and all I have are foam ones. I did think to try my hand at a hot glue skull. The idea is you take a skull, coat it in tin foil, then dribble hot glue all across it.

Cut it in half and glue all that back together and you have a entire new skull for the price of three glue sticks. While it looks kinda creepy for just being hot glue, it wouldn't work for the mannequin plans. It's not detailed enough. 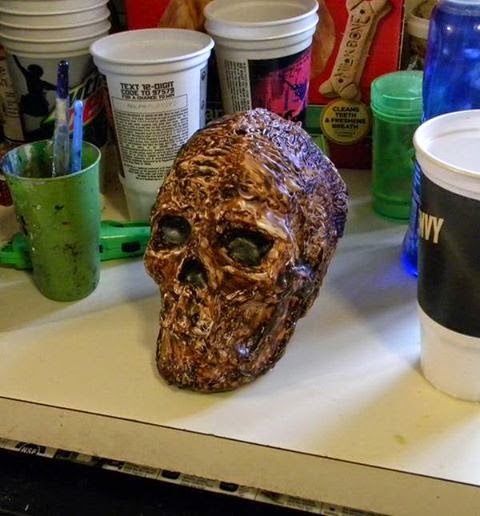 On the plus side. If I ever decide to get my own catacombs, I know a cheap way to get lots of skulls.
at 7:37 AM No comments: Links to this post