The posters for 2013 are up and ready for anyone to download or print here.

Chills are creeping in.

Ghosts and goblins are creeping out.

It's once again time to get your spooky read on.

Last year I made posters of the classic universal monsters enjoying their favorite macabre tales of horror.

This year I went a bit more classic Halloween, lots of bats and spiders and, uh, mummies.

Once again click on them, save, print off, have your own ticker tape parade all for free. 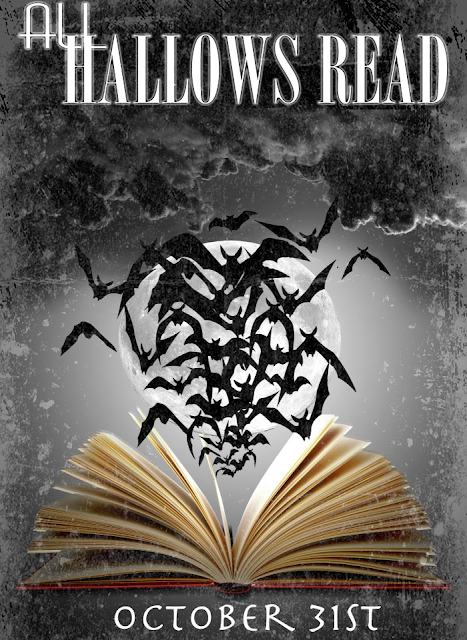 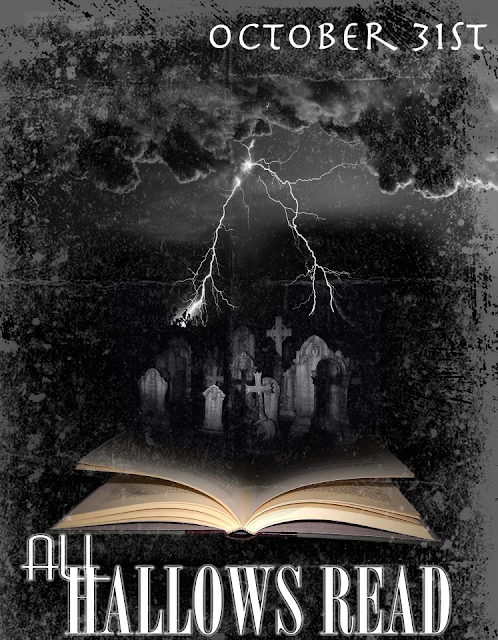 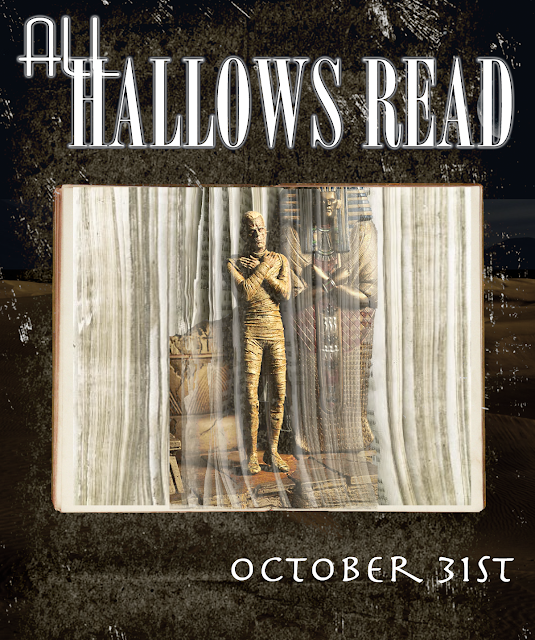 4. I think this one is my favorite. Warning, spider! 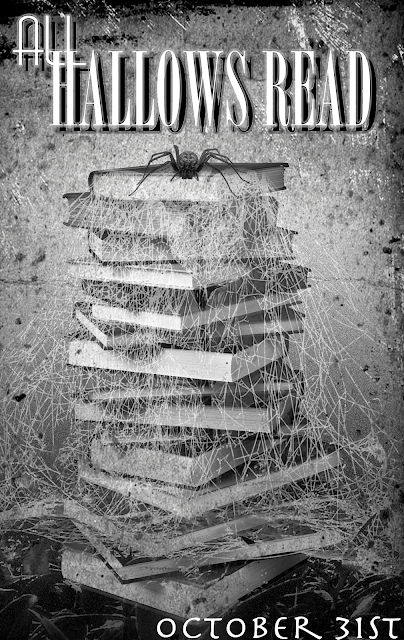 And if you have any interest in last years they're all here, also available for download and what not.
at 8:04 AM 4 comments:

My idea of comfort food tends to steer a bit away from the traditional american fare - hotdogs, chicken nuggets, the orange neon radioactive noodles from the blue box - and to german influenced pound a piece of pork flat, dredge in flour, fry it up and cover in unctuous brown gravy. So I don't tend to go out of my way to remake the classics but better.

Then I went and got married to an occasional Catholic and suddenly this Lent thing meant needing to think of non-meat dishes for Friday and pretending I thought of something really good to give up. (For old readers this should seem old hat, what can I say three years blogging there's bound to be repeats)

Thus began my attempts to find a good homemade baked macaroni and cheese that does not put one in mind of ground up cheetos. My first attempt still reigns as my biggest kitchen disaster, it called for onions, a lot of it too, and there were complications. It wasn't creamy, just a large gelatinous blob of what was once cheese with some noodles clinging desperately for life encased within.

Next lent I tried again and stumbled across what is possibly the ambrosia of Mac & Cheese and also one of the quickest and easiest recipes in my arsenal.

1. 8 ounces of pasta (It doesn't have to be elbow, I've done bowties and penne before)

4. A crap ton of cheese. I prefer Cheddar (the kind that tries to bite your tongue back) and Emmentaler mostly because it's cheaper than Guyere but that and Swiss work just as well.

You will need to start the night before, which I rather enjoy. Take some time, make a big mess and then leave it for the morning.

Boil the pasta but only for 4 minutes. You'll want it very very al tooth.

While that is quickly boiling, grate cheese. I like a lot of cheese. The original recipe calls for one cup of each but I always do two and then throw in some shredded for a touch of color. Save back about a cup for the topping in a separate bowl.

Into the large bowl of grated cheese add the cream, the milk, the still hard pasta and some salt and pepper to taste. Then put that in the fridge to sit overnight and suck up the creamy goodness while you save Hawke's butt from getting killed by Qunari (or whatever it is normal people do).

It's tomorrow which means preheat the oven to 400. You'll also want to pull out the pasta bowl so it gets to room temp.

Dump the cheesy pasta into a 9X9 baking dish. Mix 3/4 cup of bread crumbs with some butter and the leftover cheese for that oh I think my taste buds exploded topping.

Now put your casserole dish into the oven for 15-20 minutes and voila! 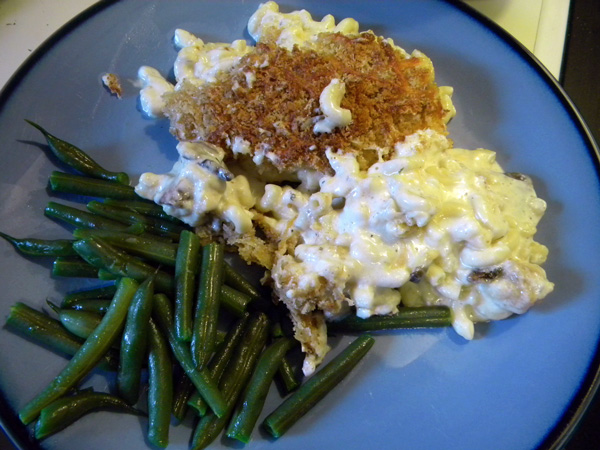 My favorite oh my god this is so rich I can only eat a few bites before passing out in joy mac &cheese recipe. The fact it's so easy a focused gila monster with a culinary degree helps.
at 8:08 AM No comments:

So remember all those Doctor Who paintings I photoshopped about a year back for fun?

I decided to make one for real. With actual paint and everything. 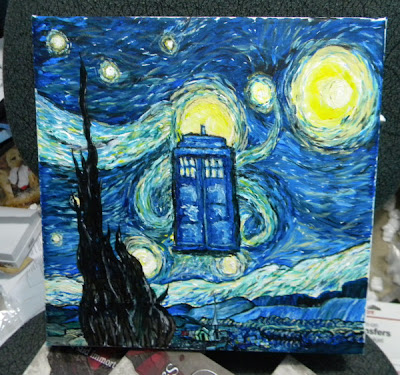 She's on a 12X12 and took about 8-10 hours or so. It's amazing how much time can be lost in making oodles of little lines that turn into stars, towns, or a mad man's box.

If you have any interest in this painting then I have some good news. Because I actually like this one so much I decided to offer it up for prints. Multiple, multiple prints.

The first is from the fancy pants print store I joined that lets you really see all those brush strokes that makes impression art pop.

The next is for the less discerning customer, where I store all my old T-shirt and other random ideas

Or there's deviantART, because why the hell not.

Email ThisBlogThis!Share to TwitterShare to FacebookShare to Pinterest
Labels: Doctor Who

Last year we made the typical rounds of checking out every store imaginable to see what they offered for Halloween. (I'm very disappointed in Jiffy Lubes selection)

At Menards we discovered a giant skull that I had wild dreams of corpsing into a giant rotting skull to something something, but time slipped through our grasp and we never made it back before Christmas had already begun it's holly jolly steamroll.

Well this year the Halloween Dance is much smaller (and seems to be ignored) and our own haunt has been getting the bit of the shaft due to a Middle of the Week holiday, so I GOT THE SKULL! 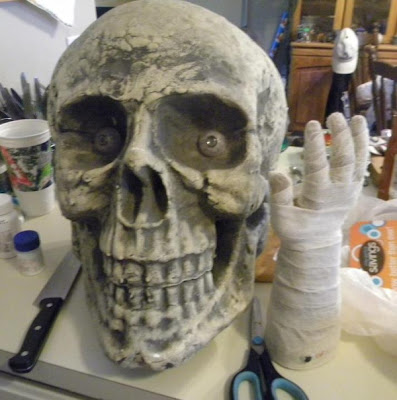 He lived in the backroom for a few weeks as I finished up other things, like my little adipose. But I finally snapped and decided it was time.

I began by adding some simple rolls of paper towel to make muscles, half a nose, and eventually eyelids, then dotted fabric all over his face with an old sponge. 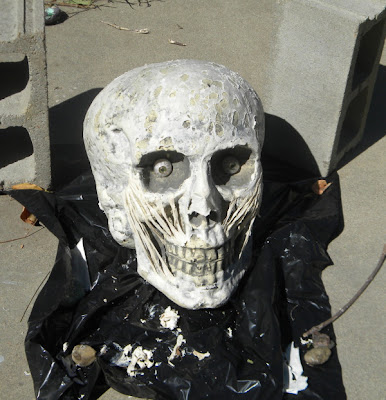 The next step was paint. Lots and lots of red paint.

I'd suggest getting all kids and anyone with a heart condition out of the room for this. Unless they like blood then scoot closer. 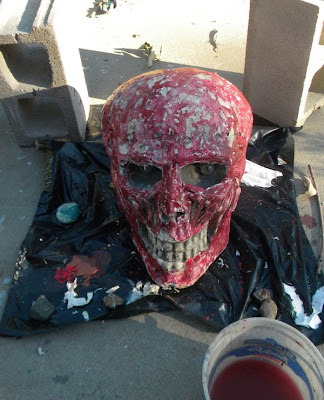 Then it was just deadening some of the flesh overtop with some grey and tan tones. 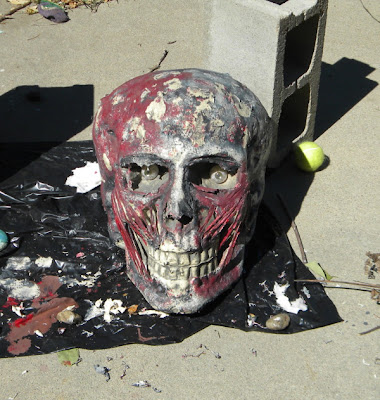 It's never smart to piss off your thumbs, they can make life very unevolved for you.

Finally I did some detail work, brought out the teeth all boring stuff. 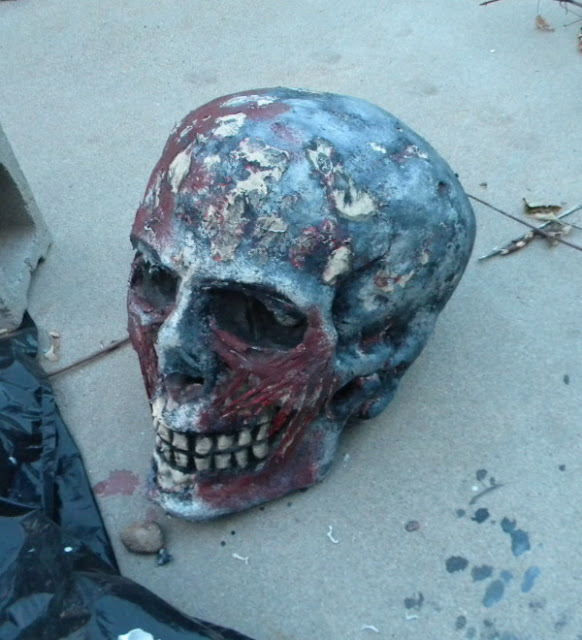 The skulls eyes actually light up, an option I doubt I will ever use for obvious reasons. 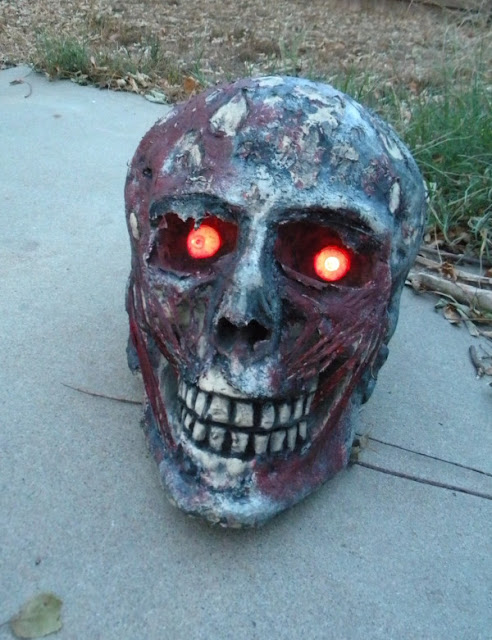 And one more just to prove how big this thing is. That's a regular sized foam skull you can get just about anywhere next to skullus gigantis. Now I just have to figure out where the hell I'm putting this thing in the yard.
at 1:44 PM No comments:

The first week in September is when I decide I can let my inner Addams out and start decorating for Halloween. At least the inner parts of the house which no one will see anyway so there's no need for all the pointy sticks and bonfires.

I always begin with the mantle. It's simple enough, and never ever quick. 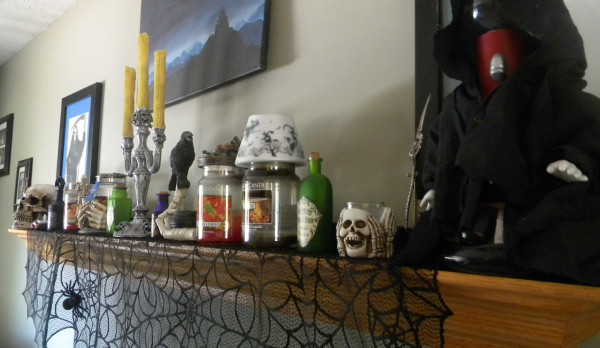 But this year I decided that Drac's Castle just didn't fit. It was a little too dark for our dank pit of a living room. Plus we'd wound up going so black and white the blue was a little too jolly for Reaper Servo and his gothettes.

So I set out to create a painting that was a little spooky, a little haunting, and lots of trees because trees are easy. 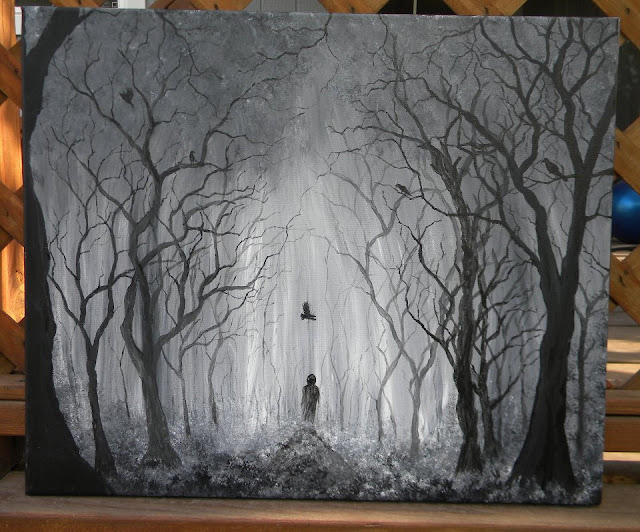 But of course, the bigger question is, will it hold up over the fireplace? It has very picky taste. 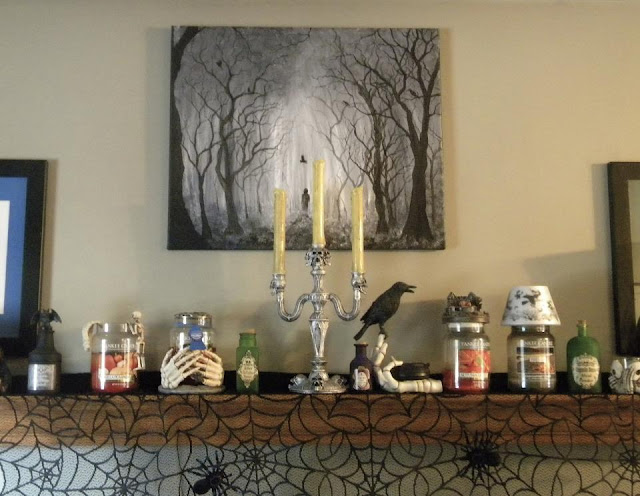 Oh one more of it all lit up by the fire hazard glow of my many Halloween candles that in no way contain the trapped and tortured souls of the criminally insane. Nope. 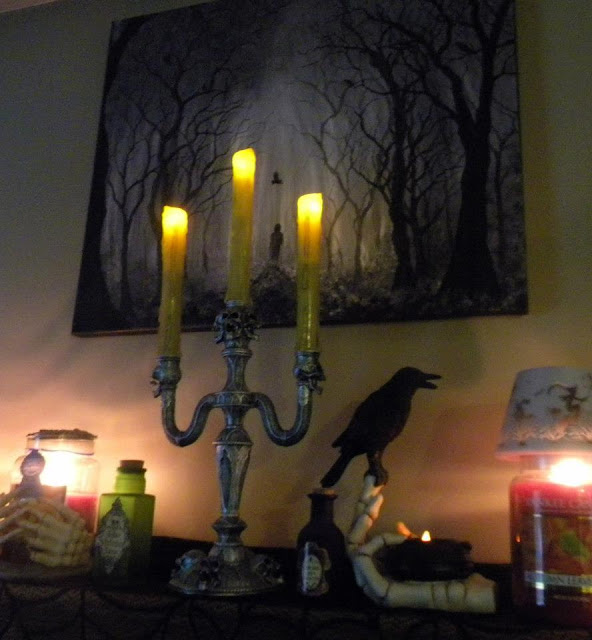 And if you don't think that painting isn't staying up until Christmas you don't know how lazy I am.
at 7:24 AM No comments:

This post won't mean a thing to you unless you're a Doctor Who fan. Of course it still might not a mean thing to you if I type it all backwards either. So I'll try to refrain.

The idea, make a set of adorable adipose making cookies. Email ThisBlogThis!Share to TwitterShare to FacebookShare to Pinterest
Labels: Doctor Who

I make it a rule to only traverse a store within stores once every rise of the spirits and demons just beyond our sight.

This means about once every September or so (and Christmas, because every human is drawn to a mall at Christmas like a sea turtle to its birth beach).

Alas there was not much by the way of Halloween yet, and what existed was rather abysmal. Just some discounted and destroyed stuff at...but I get away from myself.

My point about malls is that in the no mans land, the middle aisles where people try to hock charcoal portraits of celebrities carved into wheat germ or other inane things, sometimes you see some of the most fist clenching crap.

Yesterday was no different as I came across one of the Broiest Bros who ever started calling all of his fellows Bras. And what was he hocking? All manner of douchebag T-shirts. Normally I encourage this thing, it makes it far easier to spot and tag those who should never have sex again.

But one caught my eye, ran straight to my brain, and kicked the rage gland.

"Shut up and Make Me a Sandwich."

Ah yes, the pedantic misogynistic equivalent of pull my finger. The joke boys have to tell to remind the world that they have a penis and are scared of anyone who doesn't.

Well I bottled my rage at this lazy gamer threat from a fear of boobs and responded in the only way I could think of. 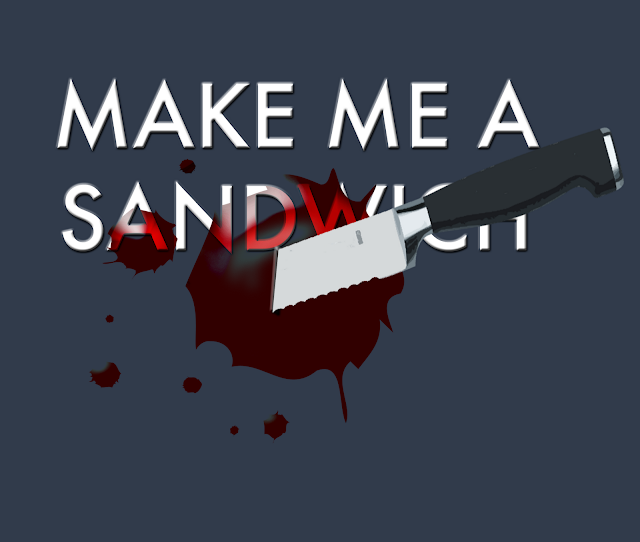 You should see just how creative I can get with a bread knife.

And because I can I put it up on a T-shirt as well. Who's oh so droll now Mr. Bleeding all over the floor Sandwich boy? That's what I thought.

I wish I could explain why I made this but it's one of those I have no idea but here ya go: 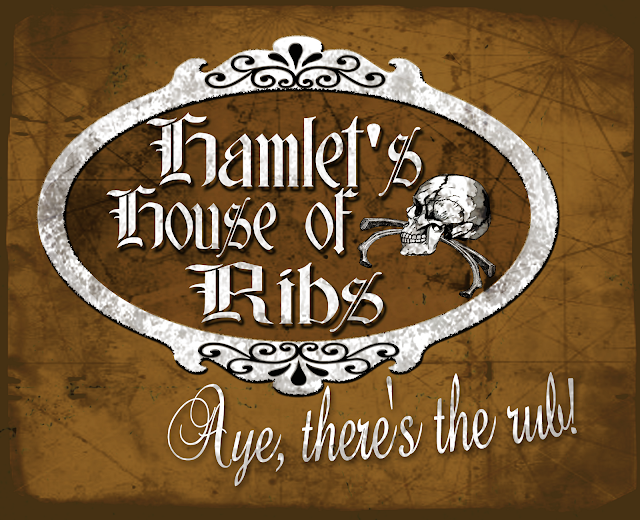